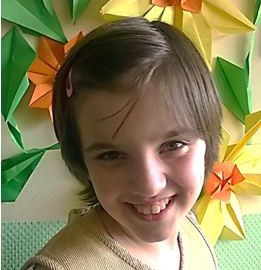 She is hardworking, bright, and caring.  She does extremely well in her studies and her favorite subject is maths.

Geri and her brother Miro were abandoned by their mother who was unable to care for them. It is unclear as to whether she shares the same father as her brother.

Whilst still with their mother, both children were enrolled in to a school for the deaf but were later taken out of this establishment when social services took custody of them in the summer of 2015, placing them in to a shelter. Neither child had difficulty in hearing.

After what became a long process, both Geri and her brother are now schooled at the New Generation Academy and are both a credit to their teachers.

Geri has been quick to make friends with the other children and having once been an outsider has been accepted by them – no questions asked!

At this pivotal time in her life, it is important for Geri’s education to continue as the majority of ‘shelter’ children do not excel without a good education which

leads to generational cycles of uneducated, poor Bulgarian communities, the children of which are vulnerable to human trafficking.

The shelter in which Geri lives is unable to cover her school fees so she must rely on the kind donations of others for her schooling to continue. We are constantly looking for good Samaritans who are able and willing to help those in unfortunate situations. Could this help come from you?

If you would like to support Geri then please feel free to give using your mobile phone via Instagiv by texting LUUK Team Jibril £5 to  70660 to make a donation of £5 Or to donate more text LUUK Team Jibril £10 to 70660. Or you can donate via Paypal.